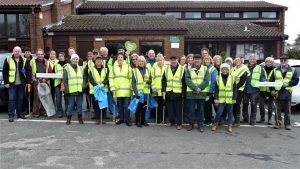 50 environmentally-conscious volunteers, armed with litter pickers and hi-visibility vests, rolled up their sleeves and tackled the litter on the verges in Shorne, near Gravesend, collecting over 80 bags of litter.

The blitz kicked off on Sunday 10th March, when Shorne Councillor Lisa McCluskey led a team of 8 volunteers through the streets and play area in Shorne West.

On Saturday 16th March, a huge team of 30 volunteers, including Gravesham MP Adam Holloway, gathered at Shorne Village Hall, before fanning out to all points of the village in search of litter.  The main effort was supplemented by a small team of volunteers led by Russell Cooper who tackled fly tipping and litter in Shorne Ifield, another 7 volunteers who were unable to make it on the Saturday so did their bit earlier in the week, and a team of 3 volunteers who cleaned up through Thong the next day.

At the same time, a team of 20 volunteers from Chalk, led by local resident Julie Merritt, attacked the streets and verges of Chalk, while Cobham Parish Council organised a team of 22 volunteers who picked the streets and lanes in Cobham and Sole Street.  To close the loop, Shorne volunteers joined hands with their Chalk counterparts at the entrance to Thames View Crematorium on Gravesend Road, and handed over to the Cobham team at Halfpence Lane.

Bob Lane, Chairman of Shorne Parish Council and organiser of the Shorne litter patrol, praised the efforts and enthusiasm of all the volunteers who took part.  “This is the 9th major litter pick we have carried out in the last 4 years, and it just goes from strength to strength,” said Bob.  “To have this number of volunteers, as well as a considerable number of others who were disappointed not to be able to take part on this occasion, just goes to show the pride we have in maintaining our local environment.”

Bob also praised staff from Gravesham Borough Council, who supported the efforts of the volunteers.  “As well as lending us some of the equipment, and promptly collecting the rubbish and bags of litter, they also picked litter from verges we had not managed to get to,” said Bob.  “All in all, it was a great joint effort.”