The Lower Thames Crossing has embarked on its latest, and hopefully its last consultation before they submit their application for Development Consent Order later this year.  Locally, the main changes are the newly-introduced proposals to acquire additional land for “nitrogen deposition” mitigation, including:

These areas are shown light green in the map below. 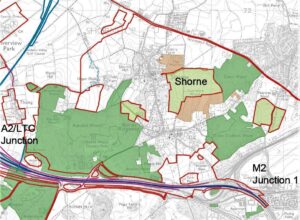 There is also land west of Henhurst Road, opposite Jeskyns park, currently farmland, and an extensive area of farmland south of the M2, east of Bluebell Hill.  These areas of land are intended to be planted with trees to create wildlife habitats to offset the potentially adverse impacts of nitrogen deposition resulting from increased traffic.

Separately from nitrogen deposition, the remaining part of Southern Valley Golf Course (east of the tunnel entrance) will also be acquired to become an extension of Chalk Park open space.  Previously designated mitigation land to the north of Shorne Ifield Road (west of Muggins Lane) has been removed from order limits, and will be replaced by land to the south of Shorne Ifield Road, to link up with Shorne Woods Country Park. This is to avoid disturbance to a mediaeval settlement archaeological site.  In addition, the Thong Lane overbridge across the A2 will be widened by a further 10 metres to provide additional screening and to improve wildlife connectivity.

The footpath/cycle path at Hever Court Road at Gravesend East will be re-designated as a bridleway, as will footpath NG8 between NG7/NG9 and the A226 near Chalk Church.  NS169 through Michael Gardens park will revert to a footpath/cycle track, and not a bridleway as previously proposed.