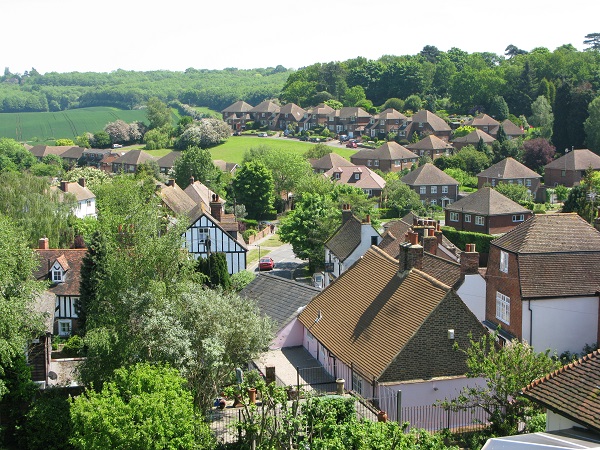 The name Shorne derives from the Saxon word “Scora” meaning a steep slope, and for the most part aptly describes the situation of Shorne Parish as it hugs the slope of the hill lying halfway between the town of Gravesend and the City of Rochester upon Medway on the North Downs, Kent.  With its three thousand or so acres the southern boundary of the parish is divided from its neighbouring parish Cobham by the A2 main road and extends for some two miles from Park Pale in the east to Clay Lane Woods in the west. The easterly boundary separating Shorne from Higham follows a generally northerly direction until it reaches the Thames, a distance of some three miles as the crow flies whilst the north-west boundary between Shorne and Chalk follows a north easterly direction incorporating a few of the streets from the Gravesend Riverview Estate until it also reaches the Thames.  The distance between the two bounds on the river frontage is a bare half mile.

Apart from the village of Shorne itself there are several small hamlets in the Parish namely those of Lower Shorne,  Shorne Ifield, Shorne Ridgeway and Thong the latter usually known as West Shorne. The lost Saxon village of Merston which lies within the Parish on the site of the present Green Lane farm in Lower Shorne was abandoned in the 15th century, probably due to the visitation of the plague. Merston and  surrounding villages are mentioned in the Doomsday Book, but no mention is made of Shorne.

An explanation of the symbolism of the Parish sign

The sign can be viewed of course from either side. This explanation assumes that the dragon fly is on the left hand side.
Starting with the top right segment. This depicts the leaves and fruit of the sweet chestnut tree, which is said to be a natural tree in this area particularly within the Country Park , as well as notably “Chestnut Corner”!
Working clockwise, the next segment depicts the Parish Church parts of which go back to Saxon times.
The next, shows St. Katharine’s. A private house and famous land mark in the village. It houses a Roman Catholic Chapel which is used only occasionally now. It is not to be confused with Little St. Katharine’s which is a wonderful example of a 15th century hall house.
The last outer segment displays a Dragonfly over bulrushes. There are more than two dozen different species of dragonfly in the Shorne Country Park and they lay their eggs in the bulrushes.
In the centre is shown the Agnus Dei or Lamb of God standing on a representation of a hill with a river flowing past. The Hill represents that upon which Shorne village nestles and the river, the Thames with the characteristic double bend of Lower Hope clearly visible.
The Lamb may well be a medieval stonemason’s pun as it is carved on the church font as perfectly smooth (shorn) as opposed to a very woolly lamb carved on a similar font in the nearby village of Southfleet !